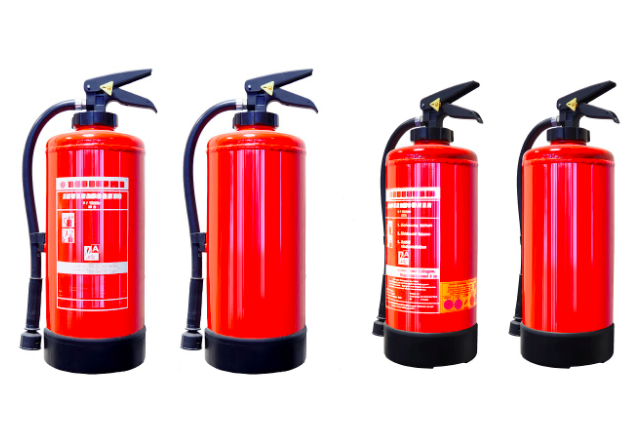 The first rudimentary fire extinguisher was invented in the Middle Ages. It was known as a "Squirt" and it was used to spray a stream of water to the base of a fire. The way the Squirt worked was similar to a bicycle pump. The nozzle was inserted into water, then you could pull on the plunger to suck up about one liter of water. Once the Squirt was filled with water, you could push on the plunger to eject the water and extinguish the fire.

Fire extinguishers are cylinder-shaped, handheld devices that are made out of steel. They're usually red in color to increase the visibility of the device. In order to put out small fires in a home or workplace, the extinguishers are armed with one of the seven pressurized agents. The type of agent is determined by the Class of the fire and the type of environment it's used in.

Fire extinguishers play an important role for business owners. In about 80 percent of fire incidents, a fire extinguisher is all that's necessary to put out the fire. The use of a fire extinguisher can make the difference between minor and major fire damage. If you're able to stop a fire before it spreads, then it could result in less damages and lower repair bills.

Frontier Fire offers the top fire protection services in Colorado and Utah. If you're in need of fire extinguisher, fire alarm or fire sprinkler services, then give us a call today. We can handle anything from maintenance and repairs to installations and inspections. Plus, we offer 24/7 emergency service in case of urgent situations.